Remember that homeostasis is the maintenance of a relatively stable internal environment. When a stimulus, or change in the environment, is present, feedback loops respond to keep systems functioning near a set point, or ideal level.

Feedback is a situation when the output or response of a loop impacts or influences the input or stimulus.

Positive feedback loops are inherently unstable systems. Because a change in an input causes responses that produce continued changes in the same direction, positive feedback loops can lead to runaway conditions. The term positive feedback is typically used as long as a variable has an ability to amplify itself, even if the components of a loop (receptor, control center and effector) are not easily identifiable. In most cases, positive feedback is harmful, but there are a few instances where positive feedback, when used in limited fashion, contributes to normal function. For example, during blood clotting, a cascade of enzymatic proteins activates each other, leading to the formation of a fibrin clot that prevents blood loss. One of the enzymes in the pathway, called thrombin, not only acts on the next protein in the pathway but also has an ability to activate a protein that preceded it in the cascade. This latter step leads to a positive feedback cycle, where an increase in thrombin leads to further increases in thrombin. It should be noted that there are other aspects of blood clotting that keep the overall process in check, such that thrombin levels don’t rise without limit. But if we just consider the effects of thrombin on itself, it is considered a positive feedback cycle. Although some may consider this a positive feedback loop, such terminology is not universally accepted.

Negative feedback loops are inherently stable systems. Negative feedback loops, in conjunction with the various stimuli that can affect a variable, typically produce a condition in which the variable oscillates around the set point. For example, negative feedback loops involving insulin and glucagon help to keep blood glucose levels within a narrow concentration range. If glucose levels get too high, the body releases insulin into the bloodstream. Insulin causes the body’s cells to take in and store glucose, lowering the blood glucose concentration. If blood glucose gets too low, the body releases glucagon, which causes the release of glucose from some of the body’s cells.

When you exercise, your muscle cells use oxygen to convert the energy stored in glucose into the energy stored in ATP, which they then use to drive muscle contractions. During exercise, your muscles need more oxygen. Therefore, to maintain an adequate oxygen level in all of the tissues in your body, you increase respiration rate and depth. This allows you to take in more oxygen. Your heart rate increases, which allows it to deliver more oxygenated blood to your muscles and other organs that will need more oxygen. This is an example of a negative feedback loop because the body is maintaining a set level of oxygen in the bloodstream. As the muscles use the available blood oxygen (stimulus), the body works to replace this oxygen by breathing in more oxygen (increased intake) and transporting it more quickly throughout the entire body (quickened heartbeat). This system is inherently stable because when you modify your exercise, your body modifies its responses to maintain a set level of oxygen available to all tissues in the body.

A good example of positive feedback involves the amplification of labor contractions. The contractions are initiated as the baby moves into position, stretching the cervix beyond its normal position. The feedback increases the strength and frequency of the contractions until the baby is born. After birth, the stretching stops and the loop is interrupted.

Another example of positive feedback occurs in lactation, during which a mother produces milk for her infant. During pregnancy, levels of the hormone prolactin increase. Prolactin normally stimulates milk production, but during pregnancy, progesterone inhibits milk production. At birth, when the placenta is released from the uterus, progesterone levels drop. As a result, milk production surges. As the baby feeds, its suckling stimulates the breast, promoting further release of prolactin, resulting in yet more milk production. This positive feedback ensures the baby has sufficient milk during feeding. When the baby is weaned and no longer nurses from the mother, stimulation ceases and prolactin in the mother’s blood reverts to pre-breastfeeding levels.

The above provide examples of beneficial positive feedback mechanisms. However, in many instances, positive feedback can be potentially damaging to life processes. For example, blood pressure can fall significantly if a person loses a lot of blood due to trauma.

Blood pressure is a regulated variable that leads to the heart increasing its rate (i.e. heart rate increases) and contracting more strongly. These changes to the heart cause it to need more oxygen and nutrients, but if the blood volume in the body is too low, the heart tissue itself will not receive enough blood flow to meet these increased needs. The imbalance between oxygen demands of the heart and oxygen supply can lead to further heart damage, which actually lowers blood pressure, providing a larger change in the variable (blood pressure). The loop responds by trying to stimulate the heart even more strongly, leading to further heart damage…and the loop goes on until death ensues.

You saw an example of a feedback loop applied to temperature and identified the components involved. This is an important example of how a negative feedback loop maintains homeostasis is the body’s thermoregulation mechanism. The body maintains a relatively constant internal temperature to optimize chemical processes. Neural impulses from heat-sensitive thermoreceptors in the body signal the hypothalamus. The hypothalamus, located in the brain, compares the body temperature to a set point value.

These effects cause body temperature to increase. When it returns to normal, the hypothalamus is no longer stimulated, and these effects cease. 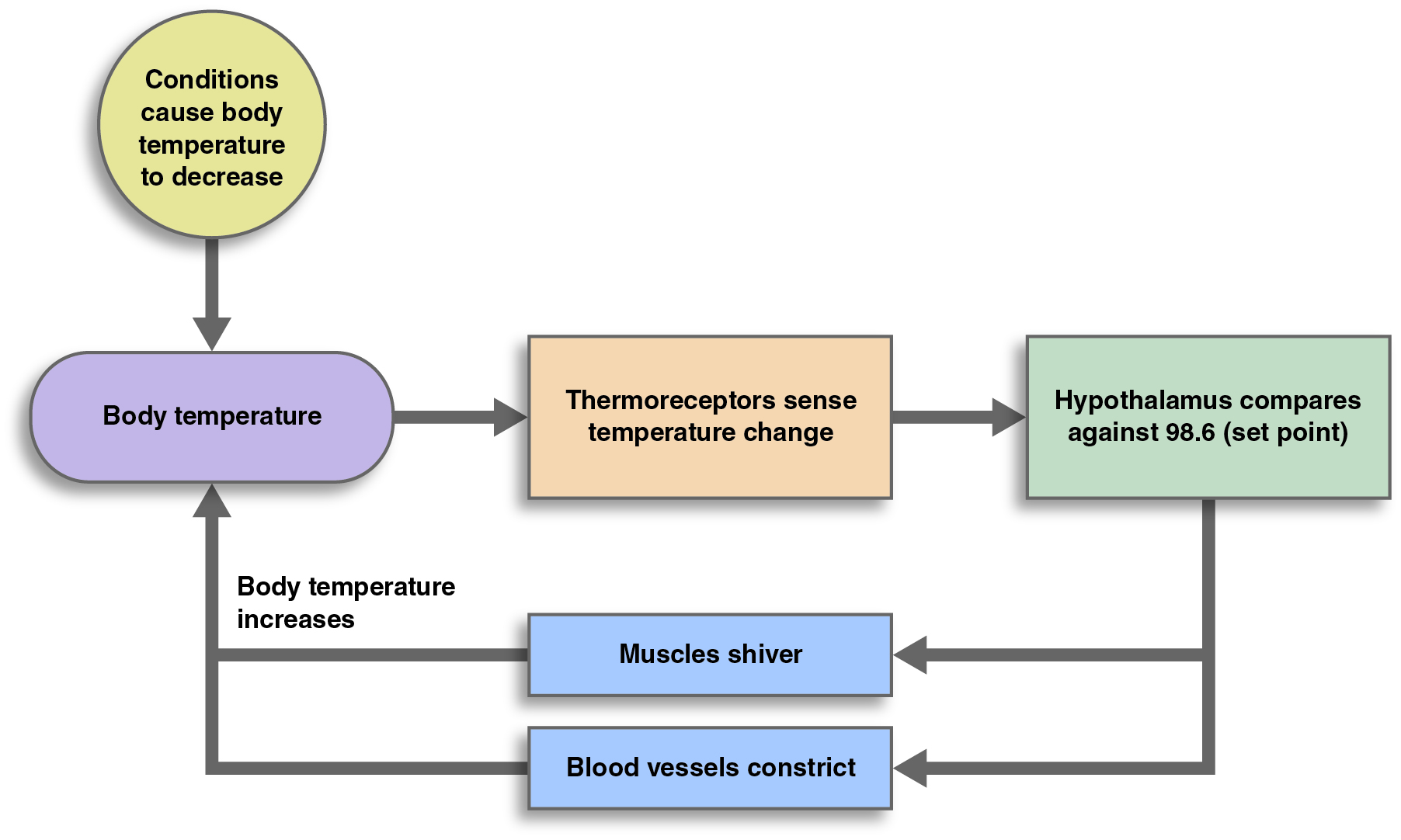 These effects cause body temperature to decrease. When it returns to normal, the hypothalamus is no longer stimulated, and these effects cease. 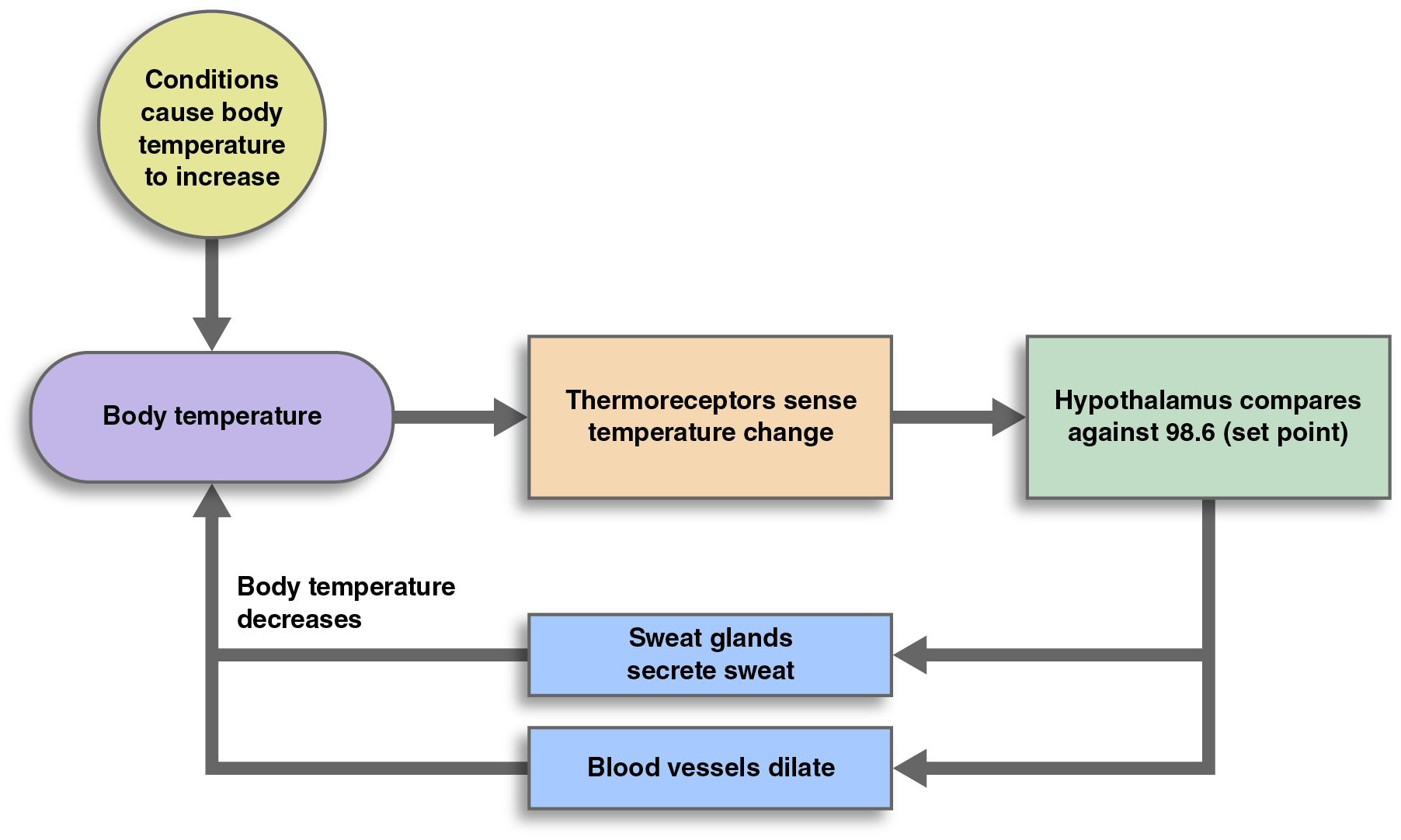 Many homeostatic mechanisms, like temperature, have different responses if the variable is above or below the set point. When temperature increases, we sweat, when it decreases, we shiver. These responses use different effectors to adjust the variable. In other cases, a feedback loop will use the same effector to adjust the variable back toward the set point, whether the initial change of the variable was either above or below the set point. For example, pupillary diameter is adjusted to make sure an appropriate amount of light is entering the eye. If the amount of light is too low, the pupil dilates, if it is too high, the pupil constricts.

Anatomy & Physiology by CCCOnline is licensed under a Creative Commons Attribution-ShareAlike 4.0 International License, except where otherwise noted.